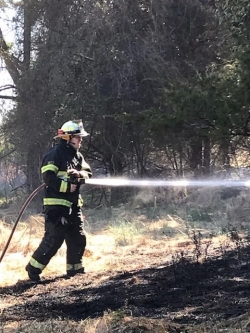 Crews from Station 48 spent a majority of last night and the early hours of this morning on a mutual aid assignment in Bound Brook on a multi-alarm structure fire. Brush 48 was requested to assist in ...
➜
Overturned Motor Vehicle 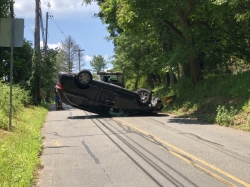 On the afternoon of June 27, Station 48 was dispatched to Fairview Drive for the overturned motor vehicle. Upon arrival crews found a minivan on its roof and preceded to set up a safety perimeter unti...
➜
Dispatch for MVA

Stations 48 and 32 were dispatched to Highway 202 in the area of Whiton Road for the MVA. Crews on scene worked quickly to secure power to the vehicle and control leaking fluids. Crews awaited the arr...
➜
News headlines
2022 Memorial Day Parade 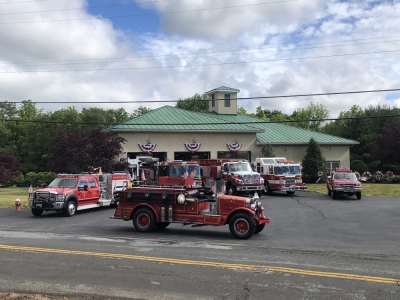 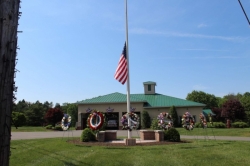 Due to COVID-19 restrictions, the usual Memorial Day parade and ceremony cannot take place. Instead, we will host a procession of emergency vehicles from Branchburg, Hillsborough, Montgomery, and Thre...
➜
Ladies Auxiliary Delivers Meals 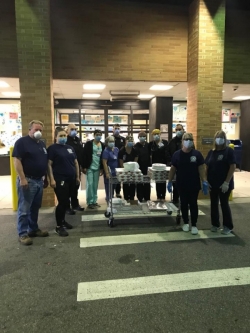 The Ladies auxiliary of the Neshanic Volunteer Fire company provided dinner for the nurses of the night shift at Hunterdon Medical Center on Friday May 1st to thank them for their hard work during thi...
➜
About us

On October 3, 1927, due to the fact that their community had been visited with so many fires recently, residents of the village of Neshanic Station had at last awakened to the fact that their town should have some sort of protection. Enthusiasm had been aroused and a soliciting committee was appointed to feel out the community and see what money could be raised. This committee was George H. Van Derveer, Lester Shurts, and Russell Cray. It was voted to purchase ladders, some pails and axes with money available. But enthusiasm waxed so strong that it appeared as if an apparatus would soon be purchased and these purchases were not made. Mr. D.C.R. Hoff was appointed as a membership committee and it was voted to organize a company, the name to be Neshanic Volunteer Fire Company. Within that same month the Ladies’ Auxiliary holds its first meeting. The following year would be a busy one for the infant company. The Bylaws are adopted in March, a little over 6 months later the Company voted to approve a contract for purchase of a Peter Pirsch & Sons fire apparatus, and in December a committee is appointed to find property for a firehouse. This property would be a lot on Olive Street. The company votes to spend $150 to purchase this lot and a 20’ x 30’ garage is subsequently erected. The Neshanic Volunteer Fire Company has begun.

March 27, 1929 was a joyous day for the residents of Neshanic Station as 200 people gather at the Neshanic Reformed Church on Amwell Road to greet the new fire engine. The event is celebrated with an oyster supper. Two dollars and thirty-four cents remains in the company treasury following payment of $3,500 to Peter Pirsch & Sons. The remaining $1,500 of the purchase price is financed by a 6% note. The first alarm is answered less than three weeks after the arrival of the new pumper. It is a fire at the Bergen Farm on April 27, 1929; a fire phone is established the following week. That summer the Fire Company would host a carnival to raise money. A total of $1,426.95 is raised. Following the carnival, a siren is ordered on a trial basis from W.S. Darley Co. in Chicago. It is subsequently decided to keep the siren and $95 is sent to Darley with a promise to pay the remaining balance of $180 within one year. (The siren proved to be a good investment--it is still in use today.)

January brought a financial benefit to the young company as Hillsborough Township would make a $50.00 donation. The following month an appointed committee would approach Branchburg Township for a donation as well. In March, an auditorium and kitchen were added to the firehouse and the “Grand Opening” is celebrated with a turkey supper and dance. The Crestmoore Club Orchestra plays and NJ Assemblyman J.I. Bowers and Somerville Mayor Robert Adams make speeches. Finally in October of 1933 the Neshanic Volunteer Fire Company is officially incorporated.

A then state-of-the art pumper built on a Studebaker chassis is delivered in 1951. The truck costs $8,995. An addition is put on the firehouse to accommodate the new pumper. The following year the Fire Company’s 25th Anniversary is celebrated. Hillsborough Township Committeeman David W. Amerman, who was the Fire Company secretary in 1927, is on hand to read the minutes of the first meeting to the 150 people gathered for the anniversary party and dinner. Better fire protection is needed to serve the village, and in 1958 Orville Shurts donates a large parcel of property on the corner of Maple Avenue and Pleasant Run Road.  This is the site of a proposed fire pond. Ultimately, a new firehouse will be built on the property. A fire pond is constructed and a water main with fire hydrants is installed to provide better protection for the village. The project costs over $13,000 and takes two years to complete. In 1963 the 1929 Pirsch is replaced by a Hahn pumper on an International chassis and in 1968 a second Hahn pumper replaces the Studebaker, which goes into storage.

The decade of the 70's would mark a year of change for the Neshanic Volunteer Fire Company. In November 1972 the Studebaker comes out of storage and is loaned to Hillsborough Fire Company #2 while one of their pumpers is repaired. It is the last time the truck is in service. On February 6, 1977 Fire engines pull out of the Olive Street firehouse for the last time. The new firehouse on Maple Avenue is in operation. In June of the same year the new firehouse is dedicated. Congresswoman Millicent Fenwick presents a United States Flag flown in Washington, DC. The Hillsborough High School Band plays the Star-Spangled Banner as the flag is raised. Speakers at the dedication include Fire Chief Wayne Covert (grandson of the first Chief) Fire Company President William Toman, representatives from Branchburg Township, Hillsborough Township, the Somerset County Board of Freeholders, New Jersey Assemblyman Raymond Bateman, and Congresswoman Fenwick. A year later over 50 fire departments from throughout Central New Jersey participate in a gigantic parade marking the 50th Anniversary of the Neshanic Volunteer Fire Company. March 2, 1979, an explosion at the Wilson Products Company kills a worker and ignites a fire that sends seven firefighters to the hospital. Firefighters from Neshanic, Hillsborough #1, Hillsborough #2, and the plant’s fire brigade battle the blaze. That same year the Company would place into service its first “mini attack truck”, a Pierce. November of 1979 placed the Neshanic Volunteer Fire Company in the midst of a political battle. The Somerset County Freeholders announce that the Neshanic Station Bridge (Elm Street) is unsafe, lower its weight limit to 3 tons, and say that it may have to be closed.  Built in 1896 by Berlin Bridge Company of East Berlin, CT, it is on the National Historic registers, and is one of six lenticular bridges remaining in the United States. The county has no plans to repair the bridge since a new one has been built downstream. The Neshanic Fire Company protests; saying that the bridge is vital. The company’s new mini attack truck continues to cross the bridge, but the heavier pumpers are forced to make the two minute detour over the new bridge. A month later a neighbor reports flames coming from a house on Amwell Road. The home is badly damaged, but the fire is extinguished. Chief Kenneth Ball declares that the house “would have gone to the ground” if the Neshanic Station Bridge had been closed. The next day, a letter is sent to County Freeholders giving details of the fire.

On February 8, 1980 barricades are erected and the bridge is closed. Outraged firefighters begin a four year campaign to have the bridge reopened, citing delayed response to a large section of Hillsborough Township. In 1984 a new Pierce Dash 1,250 g.p.m. pumper joins the fleet. The political campaign launched by the Fire Company less than a year before, finally paid off, and on September 9, 1984 at 2:00 p.m., Freeholder Director John Kitchen cuts the ribbon and the Neshanic Station Bridge is officially reopened. The first vehicle to cross is Neshanic’s 1929 antique fire engine, followed by the rest of the Neshanic trucks and a procession of fire and rescue apparatus from Hillsborough and Branchburg. The 1986 annual Memorial Day parade would be attended by a special guest. Then Freeholder Director (future NJ Governor) Christine Todd Whitman would be the featured speaker. In July of 1989 a new Kenworth S&S 3,500 gallon tanker is purchased and placed in service; thus helping to combat the lack of public water in much of the Company’s response area.

A Pierce Lance 1,250 g.p.m. pumper is placed in service in 1993, replacing the 68’ Hahn. The fleet would get a further update in 1997 with the purchase of the new Mini Attack truck and a new Brush truck; both manufactured by M&W Apparatus builders.

The turn of the century would be a new beginning for the Neshanic Volunteer Fire Company. In 2003 the Company would celebrate its 75th anniversary with a large picnic and a concert by the David Christopher Band held in the Firemen’s Meadow on Elm Street. In 2003 a new American LaFrance Eagle 1,500 g.p.m. pumper was purchased by Branchburg Township to replace the 1984 Pierce Dash that had served the Company so well. From 2001 - 2005 the almost 30 year old firehouse would get a facelift as well. A renovation to the member’s area, a new roof, and pole barn would be constructed.

With the help of a donation by the Hillsborough Board of Fire Commissioners, a new KME Eliminator 3,000 gallon tanker was purchased. This would replace the 1989 S&S Kenworth which would be subsequently sold off to a fire company in the mid-west.

This site has been viewed 76,715 times.
Calls
News
Events
Pictures
Apparatus
FollowTweet
Maintained by the members and staff of Neshanic Volunteer Fire Company Inc.. Designated trademarks and brands are the property of their respective owners. Copyright © 2006-2022. YourFirstDue Inc. All Rights Reserved. Content on this web site is supplied by Neshanic Volunteer Fire Company Inc.. YourFirstDue Inc. cannot be held responsible or liable for any content, text, pictures, or any other media found on this web site.
Management login
Powered by